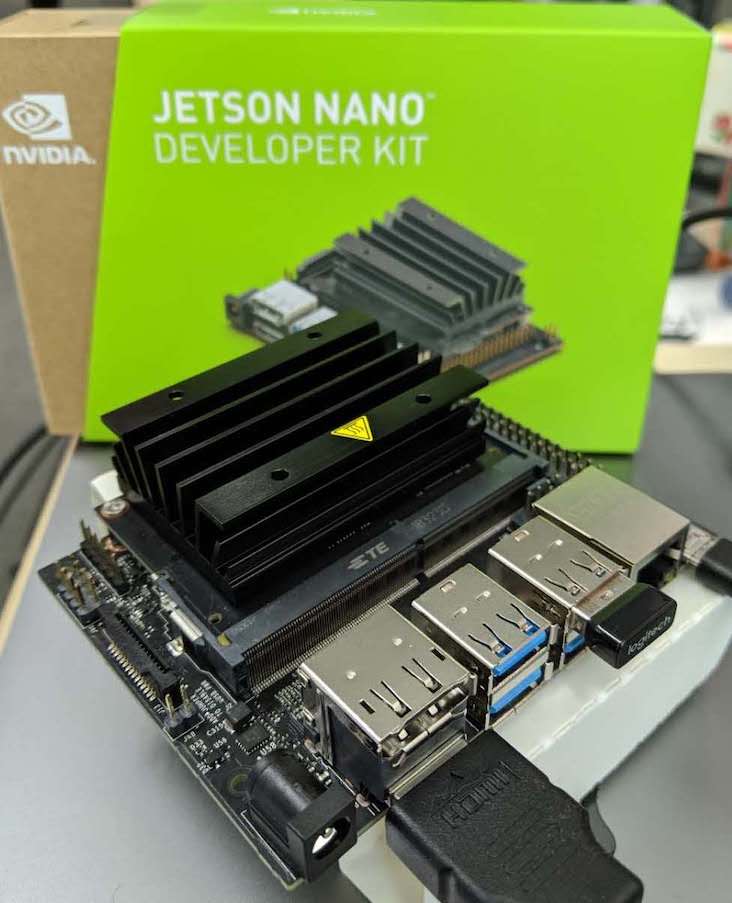 The recent release of the Jetson Nano is an inexpensive alternative to Jetson TX1:

Basically, for 1/5 the price you get 1/2 the GPU. Detailed comparison of the entire Jetson line.

The X1 being the SoC that debuted in 2015 with the Nvidia Shield TV:

Fun Fact: During the GDC annoucement when Jensen and Cevat “play” Crysis 3 together their gamepads aren’t connected to anything. Seth W. from Nvidia (Jensen) and I (Cevat) are playing backstage. “Pay no attention to that man behind the curtain!”

The memory bandwidth of 25.6 GB/s is a little disappointing. We did some work with K1 and X1 hardware and memory ended up the bottleneck. It’s “conveniently” left out of the above table, but Xbox 360 eDRAM/eDRAM-to-main/main memory bandwidth is 256/32/22.4 GB/s.

Put another way, the TX1’s GPU hits 1 TFLOP while the original Xbox One GPU is 1.31 TFLOPS with main memory bandwidth of 68.3 GB/s (also ESRAM with over 100 GB/s, fugged-about-it). So, Xbone is 30% higher performance but has almost 2.7x the memory bandwidth.

When I heard the Nintendo Switch was using a “customized” X1, I assumed the customization involved a new memory solution. Nope. Same LPDDR4 that (imho) would be a better fit for a GPU with 1/4-1/2 the performance. We haven’t done any Switch development, but I wouldn’t be surprised if many titles are bottle-necked on memory. The next most likely culprit being the CPU if overly-dependent on 1-2 threads- but never the GPU.

The OS install itself is over 9 GB and the Nvidia demos are quite large such that a 16 GB SD card fills up quick. We recommend at least 32 GB SD card.

Connecting a keyboard/display directly to the Nano is the easiest way to get started.

It is also possible to do a “headless” install:

If you’re using a Mac running Catalina (10.15) there’s some complications.

Install other software to taste, remember to grab the arm64/aarch64 version of binaries instead of arm/arm32.

For our Raven Ridge-like APU with Vega GPU we run a series of benchmarks:

But they’re either limited to Windows and/or x86. Seems the de-facto standard for ARM platforms might be the Phoronix Test Suite. Fall 2018, Phoronix did a comparison of a bunch of single-board computers that’s not exactly surprising but still interesting.

Purely for amusement also throwing in the results for the Raspberry Pi Zero. Which, to be fair, is in a completely different device class and target use-case.

PTS is pretty nice. It provides an easy way to (re-)run a set of benchmarks based on a unique identifier. For example, to run the tests from the Fall 2018 ARM article:

The “Pi 3 B” and “TX1” columns are reproduced from the OpenBenchmarking.org results. There’s also an older set of benchmarks, 1703199-RI-ARMYARM4104.

Check out the graphs (woo hoo!): 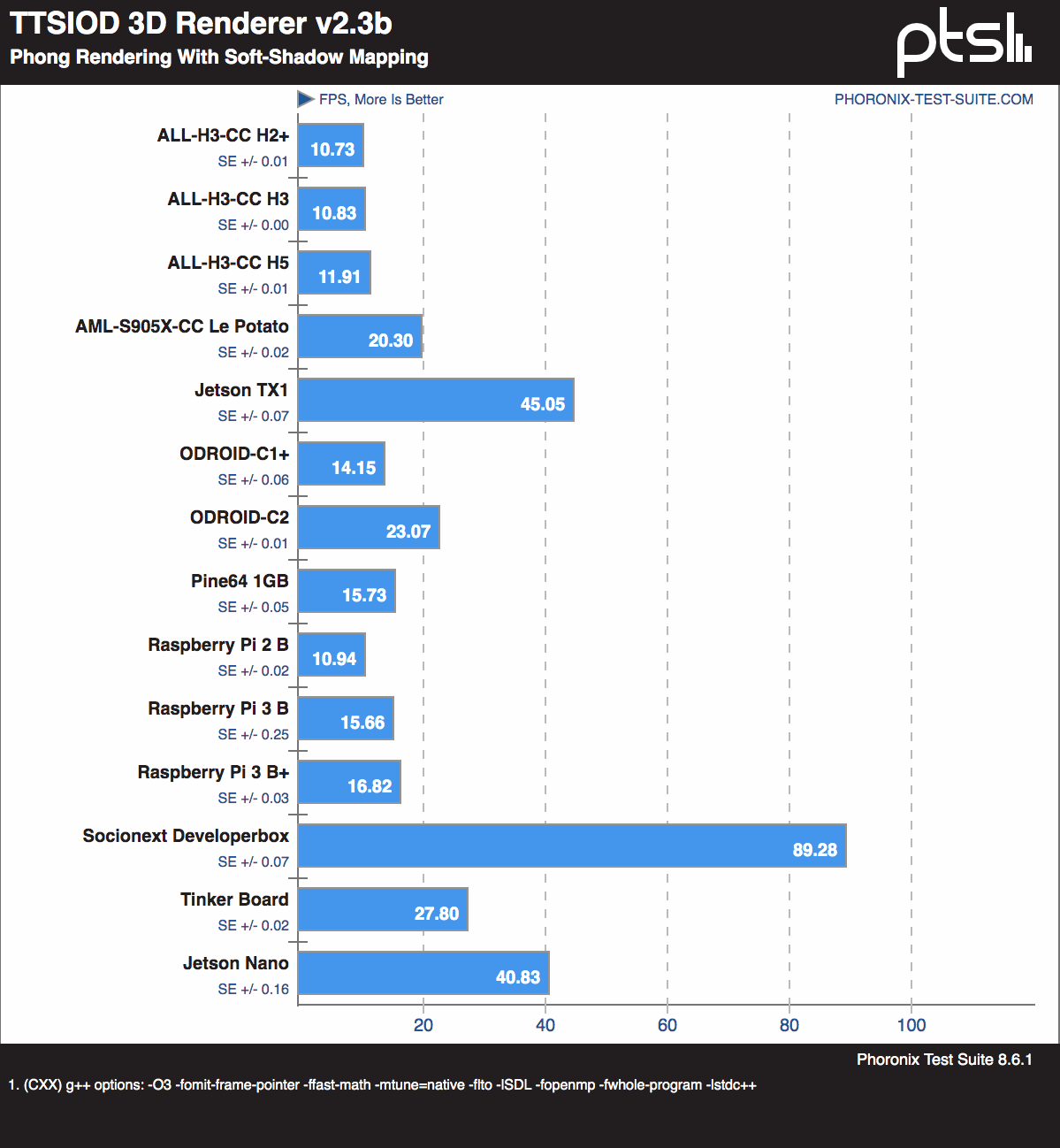 These all seem to be predominantly CPU benchmarks where the TX1 predictably bests the Nano by 10-20% owing to its 20% higher CPU clock.

Don’t let the name “TTSIOD 3D Renderer” fool you, it’s a software renderer (i.e. non-hardware-accelerated; no GPUs were harmed by that test). Further evidenced by the “Socionext Developerbox” showing. Socionext isn’t some new, up-and-coming GPU company, that device has a 24 core ARM Cortex A53 @ 1 GHz (yes, 24- that’s not a typo).

There’s more results for the Nano including things like Nvidia TensorRT and temperature monitoring both with and without a fan. But, GLmark2 is likely one of the only things that will run everywhere.

Getting GLmark2 working on the Nano is easy:

You can use the commit right after Pi3 support was merged:

Build everything and run it:

If it fails with failed to add service: already-in-use? take a look at:

Both mention commenting out dtoverlay=vc4-kms-v3d in /boot/config.txt- which was added when we enabled “GL (Full KMS)”.

After getting your system setup, take a look at “Hello AI World” which does image recognition and is pre-trained with 1000 objects. Start with “Building the Repo from Source”. It took a while to install dependencies, but then everything builds pretty quick.