We’re excited about Amazon’s announcement of Rust Runtime for AWS Lambda. We finally got around to looking into this.

Since the announcement the end of November, Rust 1.31 and Rust 2018 as well as lambda_runtime = 0.2 have been released.

Changes to the module system mean the previous example can be simplified. First, the original code:

Now, to rename the lambda_runtime crate, in Cargo.toml:

And then in the rs:

Check github for a complete version of the updated example.

On Linux you can just:

On OSX it will fail with:

Using musl is more involved on macOS (as always). It’s covered in the original AWS blog as well as this post. The gist is using this brew script to install musl-cross-make:

That doesn’t create musl-gcc, in the AWS blog he creates a soft link:

musl-gcc is a script created by the musl install target. The issue he links alludes to the solution, and it’s more explicit in this issue:

You also need to a create a .cargo/config file (in the root of the Rust project or ~/) containing:

Otherwise cargo will fail with:

You can mostly follow along with the original example, we’ll just clarify a few things here.

There’s a few other interesting panels:

If we look at our package:

2 MB compressed, 6 MB uncompressed; we’re using less than half the minimum memory and <5% of the package size. Rust was born for this stuff!

If you happen to operate between AWS regions, you might put more thought into region selection than you would otherwise. We used to do informal performance tests, but recently came across this “speedtest”:

You can sort the columns and geek-out over the box-plots and generated statistics.

If you’re in East Asia, you probably could have guessed Europe and the Eastern seaboard of North America aren’t worth considering. But between ap-northeast-1 (Tokyo), ap-northeast-2 (Seoul), and ap-southeast-1 (Singapore)? Less obvious.

All this begs the question, “why AWS, why not a regional provider?” As it so happens we’ve got an AliYun/AliCloud account and its offerings are “oddly” similar to AWS including a Lambda-like equivalent. Problem is, it lacks the derth of runtime options: 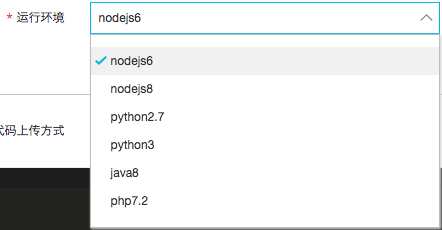 “Lambda@Edge” is the hip, marketing-savvy name given to the combination of Lambda and CloudFront (boring old CDN).

It has even stricter limits than vanilla Lambda; limiting the size of payloads and rate of requests.

Sure enough, in Requirements and Restrictions you have to use “nodejs”.