Project maintained by rendered-obsolete Hosted on GitHub Pages — Theme by mattgraham
Moments after completing my last post I noticed IoT Core running in the VM reported it had no IP address.  I initially assumed I just had to fiddle with the network adapter settings, but after dong that for a while it appears I can't get networking to work under VirtualBox at all!

Rather than give up, I decided to give VMware a try.

VMware doesn't seem to be able to work directly with the VHD image I'd created- instead expecting a VMDK.  I thought Hyper-V could be used to do the conversion, but it's only able to create a VHDX.  It looks like VMware's vCenter Converter should be able to do it, but I couldn't get that working.  In the end winimage got the job done.

Clicking through the VM setup I was again up and running with a working IoT Core VM.  This time with networking. 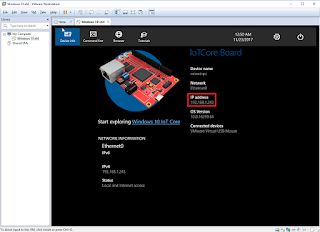 I've learned my lesson to not celebrate prematurely.

Last step was installing IoT Core Dashboard and now I should be good to go: